I can not believe that our twin grandsons are now 18months old, where has all that time gone.

I wrote some months ago about the boys and my total admiration for all parents of twins etc, we still look after them for a day a week and we love it, being part of their young lives is just magical. Our house has to become child friendly, whenever they come. It usually begins the evening before with putting up fire guard ,three safety gates, those plastic things that go into plugs, all electrical stuff out of reach, lamp jammed up against the wall with chair in front, all plants removed and, making sure in the morning cat removed to summer house in the garden. She is already on anti stress tablets!

We get a text from our DIL to say, “On our way” around half an hour later they arrive. As we go out to unpack them and their department store of stuff, they spot us and start to wave and smile, at which point of course they are now in control of us.

Having waved Mummy off for some much needed me time, it is time for a banana. Why is it that small children have to try and put as much food in their mouth as possible, so that the ability to breathe becomes a challenge.

Time now for a bit of playtime, although they are twins they are of course two completely different individuals with different personalities, one of them will sit chatting away to no one in particular and the other is busy posting all toys through the safety gates, successfully finding just the place where I don’t see them so that I nearly fall flat on my face trying to get out of the gate. I understand that these gates have to be secure but really, they don’t take into account that this Gran can’t open them, and most certainly not with one hand. Strangely, the boys are worryingly becoming very keen to show Gran how to open them!

Now nappy changing, yet another challenge. They now go to the stair gate and wait when they have a dirty nappy, sweet.

They both insist of going up the stairs themselves, so I go up with one followed behind with my OH in close pursuit with the other, we do eventually manage to get them both upstairs, they collect a teddy to take with them, the bedroom door is firmly shut so to prevent any escapees. I change one as OH deals with the tornado of the other, rushing around the room, opening all the drawers putting teddy in the drawers and slamming them shut, fingers dangerously near being squashed. My attention is now on this squirming small person with the strength of a weight lifter. Distraction is my starting point, singing, giving him another teddy, the problem with the teddy distraction is bearing in mind I am dealing with a dirty nappy and teddy is flung about a little too close to the troublesome area. If you get my drift.

At this point I have remove the offending nappy, cleaned offending bottom and have managed to get a nice clean nappy in appropriate place, then, he immediately, wees, now another question. How do little boys manage to wee up to the ceiling? So off we go again, by which time the other twin has been bouncing up and down so much on grandpas foot that, pain is etched on his face. grandpas face that is! Success nappy on, trousers on, socks……… no idea where they went?

Oh and now for the other one, good grief. When finished I look as though I have done three rounds with a boxer. Not a good time to check my blood pressure.

Off to the shops, every single time you go out people stop and say ,”Are they twins? or double trouble.”  We have to keep a watch on them all the time as they now try and grab everything off the shelves and I am terrified of getting outside the shop and finding we have, boxes of dog food, we don’t even have a dog.

If we are really lucky, they might drop off for a nap on the way home.

Time for lunch, usually consisting of, a soft cheesy roll, ham, tomatoes, cucumber and fruit. It is funny how we all turn into some sort of nutritional fanatic when feeding young children, I am sure they know that adults get wound up if they don’t eat. Also apparently food tastes so much better off the floor, so in my view cut out the middle man and just put it on the floor in the first place.

More playing, huge decision has to be made , should we have a cup of tea or not, as it’s a mind field of danger we settle for a glass of water.

This week for the first time we took them out for a walk on their reigns. I wouldn’t go anywhere with them without their reigns, one goes off in one direction whilst the other just sits down. Note to self. Don’t walk to far as they have to walk back as well, or you have to carry them, and, will have to be a back splint as soon as they have gone.

In the meantime of course we have gone through several of the nappy nightmares .Gosh now its tea time.

Having lovingly made some delicious morsel of lasagne,macaroni cheese or chicken and veg, it is met with such destain I could cry. And sometimes do! Particularly as OH and I are going to have the same delicious morsel for our tea, if we ever get it.

From now on it will be toast and, honey.

On occasions I get them ready for bed, one small issue here, we don’t have a bath. So I introduced them to our shower, well if I had had a free hand I would have taken a photo, two of us in the quite small bathroom, coaxing two small wriggly worms in the shower, 10 out of 10 for entertainment value. One good thing, I didn’t have to clean the floor, the boys did it for me, and myself and OH and towels and rather a wet loo seat. Oh dear.

It is the end of the day, two precious, gorgeous boys in the PJ’s sitting watching CBeebies waiting for Mummy, all is peace, all is quiet.

I wouldn’t have it any other way. 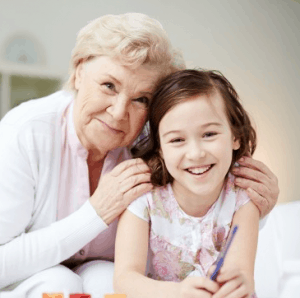 My name is Jane Jackson. I am currently a self employed training consultant and assessor, after spending over 22 years working in education. My husband and I arrived back in the UK from 8 years in Australia to be nearer of our two grandchildren, since we arrived we now have another new granddaughter to add to our collection. We miss the Australian lifestyle but it doesn’t compare with being near our lovely family. I enjoy my work and also spending time with our family.

How to help your grandchild adjust to the extra hour Fiercely Independent ✨ – We understand that becoming a parent can be an overwhelming experience but they are here every step along the way.

Open & Transparent 📖 – Some of our content may include paid advertisement and / or affiliate links.

You May Also Enjoy